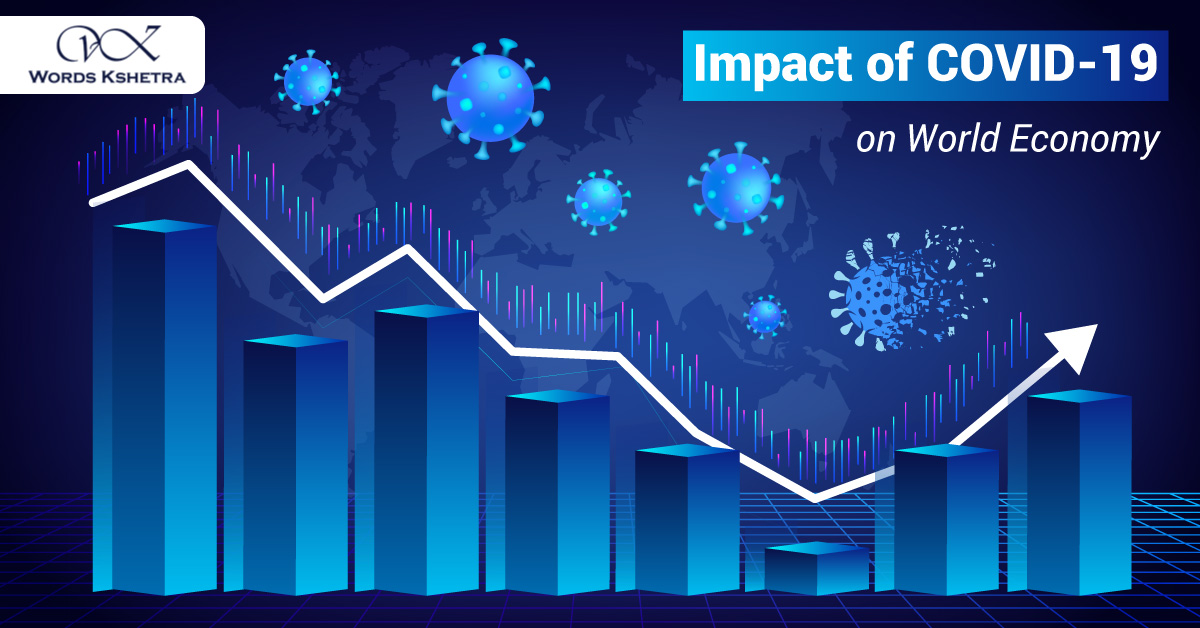 The Impact of COVID-19 on World Economy

The storm of COVID-19 has given us a reason to think about our economy and to question where will our world economy be?

The continuous growing period of lockdown globally, tragic loss of lives all over the world, the closing of the global economy, and drastic vagueness is the best way to describe the current crisis. This also makes us wonder that - will the businesses reopen again and the jobs will come back? Also, this raises questions that will the central bank and government of affected countries able to prevent a deep and permanent recession or the situation will become worse?

The whole world situation in this pandemic will sure lead to the perpetual shifts in political and economic power and it will become superficial only later.

Millions of workers are facing challenges currently and many have lost their jobs. In the verge of the scenario, the government of China, Italy, USA, Spain, France, Germany, UK, Turkey, India, are considering to roll out large stimulus packages that will avoid a sharp downturn in the economies and could potentially regulate the global economy going into a profound recession.

Let us understand below how Covid-19 is affecting different industries and business. How COVID-19 affecting the industries and different business sectors

With about 100 countries has come down and has closed its national borders during the last month, the tourism sector have been affected the most.

During the initial days of March, Hong-Kong based airline Cathay Pacific has cancelled more than three-quarters of its weekly flights. In the U.S. the government has barred its domestic and international flights by 10% and 20% respectively. India has also ceased its borders and suspended tourist visas till May 3.

The COVID-19 pandemic has hit hard on the airways and aviation industry. This outbreak seems to have a continued effect on the tourism and travel industry. The International Air Transport Association (IATA) has estimated that the global aviation industry has reported passenger ticket and has generated huge loss between $63 billion and $113 billion during the Coronavirus crisis.

Italy is known to be rich in textile and fashion industry, it is currently facing crisis during this lockdown. Due to coronavirus, Italy’s all nonessential manufacturing businesses has raised many question on how the country fashion industry could survive during this time and how it will counterfeit after the emergency is over.

Besides tourism, India has also hit a slowdown in the auto industry. As India imports about 10% of their raw materials in automobiles from China, thereby it will have a long effect in the auto industry as well. In this context, RajanWadhera, the president of SIAM (Society of Indian Automobile Manufacturers) and president (automotive) at Mahindra & Mahindra has said, “Manufacturers are finding out another best alternative to meet their demands and reach out to their stable production scale”

Moreover, the hospitality sector, foreign trading sector, mobile sellers, and the electronics sector, are also facing a crisis during this pandemic. IT sectors have encouraged their workers to work-from-home and stopped the non-critical business travel due to Coronavirus fear.

World trade is predictable to decline by between 13% and 32% in this year ahead because of the COVID 19 pandemic disruption and life around the world.

In a press release shared by WTO, they have highlighted that during 2019, the trade was already slowing down and the world merchandise trade had registered a slight decline of â€‘0.1% in volume for the year. While in the earlier year, the terms were rising by 2.9%. In the interim, the value of the dollar has also declined and the exports fell down in 2019 by 3% to US$ 18.89 trillion.

The coronavirus has plunged the economy greatly and has unavoidably invited the financial crisis. This crisis may be similar in certain respects but different than usual. This is the first time our economy is facing a complete shutdown of hotels, restaurants, non-essential retail trade, and shares of manufacturing.

This is essential in today’s times to slow the spread of the disease which is why it has also affected the labour supply, transport and travel sectors. Under these circumstances, it is vital to get strong assumptions about disease progression and find the estimated data report.

In a report by Economic times, EEPC chairman Mr Ravi Sehgal has said that the export credit had already contracted lower exports by 23 per cent in 2019 (Jan-Dec) which was much earlier since the outbreak of the global crisis.

Future trade is still unknown and it can be any situation. World Trade Organization assume two distinct scenarios, (1) with a sharp drop in trading that will recover in the second half of 2020, (2) with a steeper decline in trading with the continued decline and inadequate recovery.

This will be viewed only with the time and possible courses for the crisis rather than any specific prediction in future development. The actual outcome is yet to be seen, which will be either upward or downward.

Worldwide the Government Fear that critical systems will be overloaded

Currently, what COVID-19 is throwing into makes us wonder how false our system is and how markets are working. Nowadays, the government fear a lot about how the critical system will be when disrupted or overloaded with supply chains, social care, and healthcare. Multiple contributing factors play a major role in this.

Contributing factor of the disrupted system with critical services

Firstly, the scenario is quite hard to make money from the societal services. This is a major part because it drives profits labour productivity, growth with fewer people. People have been a major cost factor in many businesses such as healthcare. This is the reason the productivity growth in the healthcare sector falls than the rest of the economy, so its costs go up higher than average.

There are many jobs in our society in the critical sector that aren’t highest valued in our society. Many jobs are just to encourage exchanges and to make money; they don’t serve the purpose in the society. Yet, they make lots of money and have huge consultants, advertising, and massive financial sector.

Meanwhile, we also face a crisis in health and social care that we are forced out from the useful jobs because these jobs tend not to pay enough for living.

This time, during the pandemic, we are realizing greatly that many people work on pointless jobs and partly the reason why we are not prepared to respond to COVID-19. The pandemic is making us wonder why many jobs aren’t essential and where we lack sufficient things.

Many people are compelled to work on pointless jobs because society is a guiding principle in the economy where the basic goods of life are available through the market. This means you need an income which will come via a job.

Another side of COVID–19

Besides the bad sides, the COVID-19 is showing the other side of this coin too. It is the times where we are seeing the COVID-19 outbreak challenge and dominance of the market for the positive.

The government all around the world have nationalized several things

Now, the government are taking big actions that seem impossible three months ago. In many parts around the world, the government had initiated several things in support of COVID-19.

Countries like Denmark and the UK are also offering income to the resident of the country, to encourage them to not go outside and stay at home. This is quite an essential part of a successful lockdown.

These measures surely have controlled the virus effect in these countries and are a perfect initiative by these countries. Also, it encourages people to work from home and earn income which is a successful part of lockdown. Moreover, it also highlights the idea that people deserve to live in a better space even if they cannot work.

The current trend has reversed the dominant trends of the last 40 years. Over this time, the market and exchange are seen as at their best value and this is putting increasing pressure on the market to run their business who wants to make money. Likewise, many workers are exposed to the market including the zero hour contract and gig economy that has eliminated the protection layer from market fluctuations unlike the long term and stable employment offers that were used to offer.

In this tense environment, we hope for a clear cloud soon. The COVID-19 has highlighted some serious deficiencies in our system and there is an urgent need to bring radical social change.

The good news is that the birthplace of coronavirus – Wuhan was lifted a bit after the lockdown. Thousands of people have streamed out of the Chinese city and found a ray of hope but still Europe and the United States are under the threat of the virus with the growing number of deaths of more than 80,000 people worldwide and crippling economic pain.

The French economy has recorded its worst performance since 1945 and going down by six percent during the first quarter. While the Germany's economy is the biggest in Europe which is also expected to drop into "serious recession" and go down by 10 per cent in the second quarter warned by top researchers.

Moreover, the health experts and doctors believe that it is too early to set relaxation and loosen restriction as it could rush the spread of a disease.

Even the World Health Organization's regional director for Europe, Hans Kluge has said, "It is not yet the time to offer relax measures. The time is to double and triple our cooperative efforts and drive towards dominance by the support of the society”.

Another hopeful thing that has arrived in our economy is that many researchers and scientists at Cornell University in Ithaca, NY have made effort and found new parallels to fight with coronaviruses, such as SARS-CoV and MERS-CoV.

Sarah Gilbert, a professor of vaccinology, at Oxford University’s Jenner Institute in the United Kingdom, along with her team will be finding out a vaccine for SARS-CoV-2 soon by this end of fall season.

We hope, we find a sense of relief soon and start living normally like before.